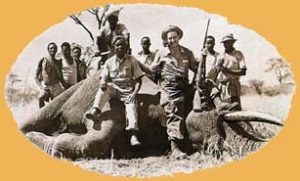 "On my first deer hunt in Utah, in 1942, I wounded a buck with a 30-06, and after following the blood trail until dark I finally had to give up. I had a sad feeling for that animal because I knew he was going to die a lingering death. I also knew that I would be trying to take another buck, and I didn't think that was good conservation. That's when I started thinking about getting a bullet to travel fast enough so it would disintegrate inside the animal's body, and the shock would cause instant death, even though the animal was not hit in a particularly vital area. Then, too, the animals would not suffer and the hunter would get the first animal he shot and wouldn't be wounding one and taking another."